About Health Qigong and TaiChi-Qigong

Qigong is a broad term used to describe various systems of physical and mental training for health, self-development, or enlightenment.  Together with massage, acupuncture and herbal remedies, Health Qigong is one of the core elements of Chinese Medicine which is used to balance the energy of the body and so guards the body against premature ageing, and poor physical / mental / emotional health.

Chinese Medicine is based on the Eastern concept of 'Qi', or universal life energy, which sustains every living thing. Qi circulates through energy pathways in the human body.  When one becomes ill, Chinese Medicine suggests that the cause of the illness is a blockage, imbalance, stagnation or adverse flow of this qi energy within the body.

The practice of Qigong stimulates our bio-electrical life energy to flow correctly within these pathways by means of specific bending, stretching and twisting movements. The manipulation of the energy channels breaks up blockages, removes stagnation and turbid Qi energy, allowing the body to naturally heal itself. In the same way that an acupuncturist would use needles to stimulate certain accupoints, so Qigong uses bending twisting compressing and stretching movements combined with mind focus / intent to do the same - a self-treatment which is less painful and less expensive :) Qigong is also very effective used along side Chinese Traditional Medicine / acupuncture and Western Medicine. 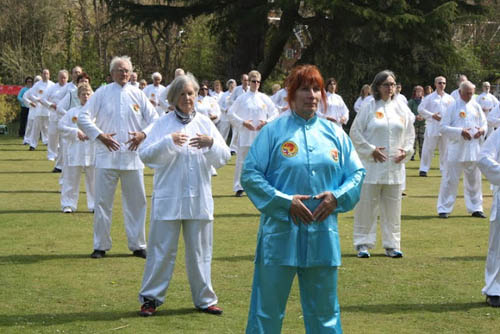 Pic: Our Instructor, Cherry, (in blue) helps lead nearly 300 participants in three sets of Chinese Health Qigong at a record-breaking event in Surrey in 2012. Delegates from the British & Chinese Health Qigong Associations  were in attendance for this event, heralding the forthcoming London Olympics.

What happens in a Health Qigong /Taiji-Qigong Class? After a gentle warm-up, we spend a few minutes quietening the mind, relaxing the body, letting go of any tendency to hold the breath. Then we learn to combine mind focus,  natural breathing with slow movements which  link together to create short forms, or routines. The movement is learnt by copying the instructor and listening to their explanations. several times over.  After the rough shape of the movements has been learnt, we look at the movements in more depth & detail and our instructor will gently correct your postural alignment.  Some people prefer to be told verbally how to make the correct shape and others gain understanding from being guided gently into the right position. Either way is fine with us and we will always ask you first before adjusting your posture.

The exercises can be performed lightly or with more strength, as suits the individual. The sets are easy to learn and can be performed at home or work, in a 10 minute tea break in a square metre or two of floor-space. This ease of practice requirements makes Qigong an ideal exercise / meditation regimen for life.

TaiChi-Qigong is a combination of gentle Tai Chi movement and Qigong. The routines are a series of beautifully flowing movements, many of which have been taken or adapted from the soft Yang Style Tai Chi

If you enjoy Tai Chi but find the many stepping movements too confusing or demanding then this set will be for you as it is practised gently on the spot, with very little footwork.

If you already practice Tai Chi then this routine will complement your practice beautifully and allow you to connect with the internal energy of the body more quickly due to it's flowing repetitive nature and will develop a quiet peaceful concentrated mind - essential for Chen Tai Chi practice (use the mind, leading the Qi, say the classics) and useful for coping well with whatever stressful situation you may find yourself, in everyday life.

And if you are a complete beginner, this class would be a perfect introduction to both Tai Chi & Qigong practice.

These sets are learned and performed slowly and purposefully. They enhance limb strength and flexibility of the joints and soothe the mind.  They can help in the treatment of illnesses such as osteoporosis and is also beneficial for those with stress and anxiety.

Health Qigong has been shown to improve the respiratory, cardiovascular and immune systems and relieve stress. Although based on ancient health practices, many of the exercise routines were brought up to date in the late 20th century by The Chinese Health Qigong Association who are led by sports scientists and professors to prove the effectiveness of the exercises via clinical trials & sports science experiments. Emphasis is placed on accuracy of movement. Pic: Our Instructor, Cherry, reviews the 5 Animal Forms with Master Zhou, in China 2011.  Cherry studied Qigong in China in 2009, 2011, 2012, 2013 and 2015, totally about a year and a half of full time residential study, 6 hours a day 5 days a week. Cherry  also studies Health Qigong several times a year in the UK with highly respected Chinese and European teachers in London and at the headquarters of the British Health Qigong Association, where Cherry qualified as a Health Qigong Instructor in 5 sets of Exercises. 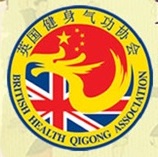 This ancient health and fitness regime was developed nearly 1900 years ago at the Shaolin Temple by the monk Bodhidharma. The Shaolin monks, after sitting in still meditation for prolonged periods found that their muscles and tendons shortened and their bodies became unhealthy and weak. Aches and pains set in and lethargy followed.

If you sit in front of a telephone, computer or at checkout all day chances are this sounds familiar.

The Yi Jin Jing exercises were introduced to get the monks moving again after periods of prolonged sitting and so restore their good health.  The exercises follow the principles of Chinese Medicine, alternating between yin & yang (relaxation and effort) and have been shown to restore and maintain health and vitality and promote a calm spirit.

After practising the Yi Jin Jing, one often experiences a number of seemingly contrasting effects: Full of energy yet profoundly calm,  a heightened awareness, yet inwardly still.

This is an extremely meditative set which involves only a small amount of movement (6 movements in total) but extremely deep mind focus.  Cherry learnt this set during her stay with a Shaolin teacher in China in 2015. It forms a part of the Shaolin Si Tie Zhuan Nei Gong Shen Fa (Shaolin Temple Iron Palm internal work of body conditioning methods)  Develops a deep meditative focus, tranquility and clarity. 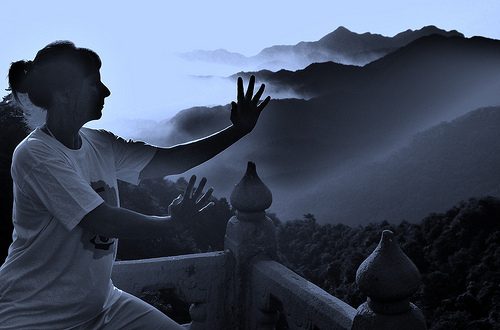 These ancient exercises greatly improve flexibility and improve the health and strength of the spine, which in turn improves the overall health of the body. The spine plays an extremely important part in maintaining good health as one of the main energy meridians, the Du Mai, runs its entire length.

Daoists refer to the spine as the 'Celestial Pillar' and the spinal exercises themselves are sometimes referred to as 'Celestial Pillar Nei Gong'. Poor posture can cause the energy gates along the spine to close. This means that Qi fails to circulate and physical illnesses arise. The Dragon Dao Yin exercises focus on realigning the spine, regaining lost flexibility and so opening the energy gates to restore overall good health and promote the correct internal organ functions.